On some events, the festival-like ones, you might get the impression that the drummers position is the most fun part of a boat and may be serves more purposes of decoration than anything else. 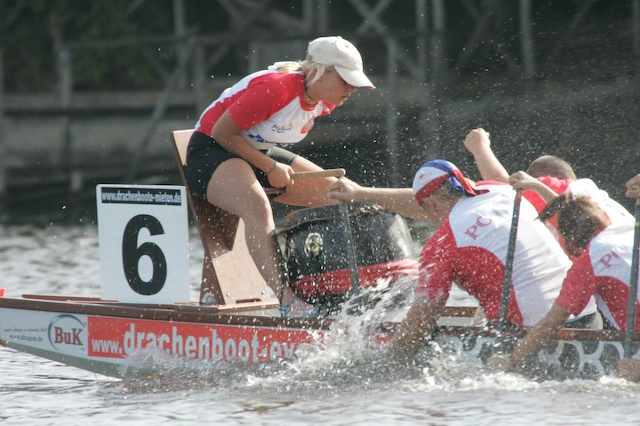 However, the drummer belongs to the boat and to the team and will have or can have, if this position is taken serious, a very decisive role in races. True, for the drummer’s position it requires a person who has a sense of rhythm. But that alone doesn’t make it.

A well integrated drummer trains together with the team so that both sides know each other and the team accepting to follow the commands given by the drummer. This only will happen, if the drummer knows how to paddle and has done so in the team. He doesn’t need to be a perfect paddler but he needs to have the feeling for the boat, for the power reserves and possible performance which, in a race, will be up him to distribute in the right way over the race distance. 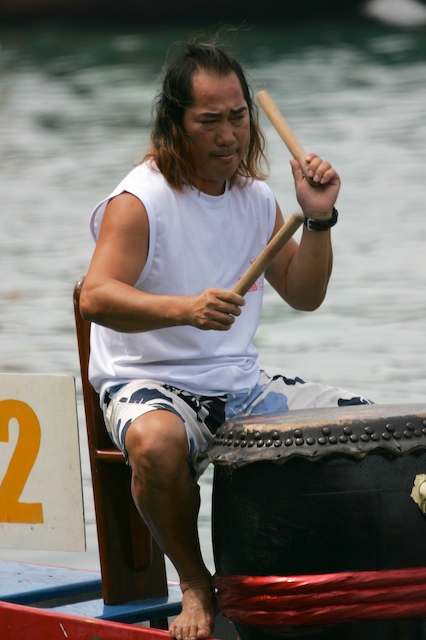 Sitting at the drum includes also a task to observe the competitors in a heat. Important is to judged on other boats ratings and speed and to calculate what the own boat has to do. The drummer must decide when to call for different power ratings.  If he calls them to early or to late - it can cost the race.

In a heat, depending on the event, there might anything between two to twelve lanes with Dragons on. That means possibly twelve drummers being very noisy, the own crew being totally concentrated on its paddling and hearing much, the race is close and tense – still the drummer must find a way to get through to his boat, to motivated them getting the extra energy out of them – for this certainly a strong arm for the drum and a loud voice are important.

In a turn, a team having a drummer they can trust and they can rely on will help them to keep the eyes in the boat and just to paddle.