Recently I was asked how the Eye Doting Ceremony is done in Hong Kong as well as how to give the name to a new boat. I’ve been asking various local people about this, including the Fishermen. Even there are variations; it comes down to the procedures I’m going describe in the following.

But first let me get something straight in general:
From Europe I got a hint that even a performer, dressed as an ancient fighter or sword man, symbolizes in a dance the hunt of the dragon and then at the end blessing him.

Well, perhaps I’m wrong but this sounds not right to me.  How can you hunt a dragon, who is the most powerful and superior being in Chinese culture?  The dragon is so powerful that you certainly don’t want to mess up with him.  Any ceremony is about respecting him and getting him into a good and friendly mood towards you, the team, the community. Such a dance I only can imagine if the “fighter” symbolizes in full respect to offer his services to the dragon. Such additional ceremonial performances are then always possible.

Let’s come to the actual Ceremony, which is known as the Eye Doting, but actually being the Awakening of the Dragon and should be repeated each year after the dragon’s rest during the off-season. Giving a name to the boat is simply included to this ceremony and seems not be as important as in Western Cultures. There is no smashing a bottle of Champagne against the hull or holy water or anything like that.  If you still like to do so, I don’t see a conflict in doing it in a separate ceremony on a different day with the dragonhead and tail not mounted.  The only difficulty I would see in damaging the boat while smashing the bottle.

Back to the Chinese way: 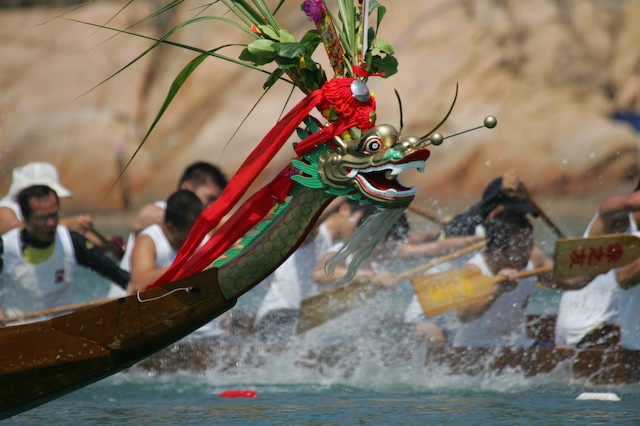 When planning the ceremony the first thing you want to do is setting the date.  You will need to consult a Chinese calendar, there are good and bad dates.  I may assume you wish to do it on a good one.  You can contact Dragon Boat Net via the Forum or by e-mail if you want to know whether your scheduled date is a good one or not, if you want to follow this.

1. Red paint and a brush
2. Incenses
3. Symbolic Hell Money
4. A metal bucket or open container to burn the Hell Money
5. A basket of fruits may be a steamed chicken or other food a dragon likes.
6. Perhaps something like a small table and table cloth
7. A roast Pig
8. (Only if you include giving a name to your boat) Red wrapping paper or clothe to cover the writing of the name on the boat’s hull. 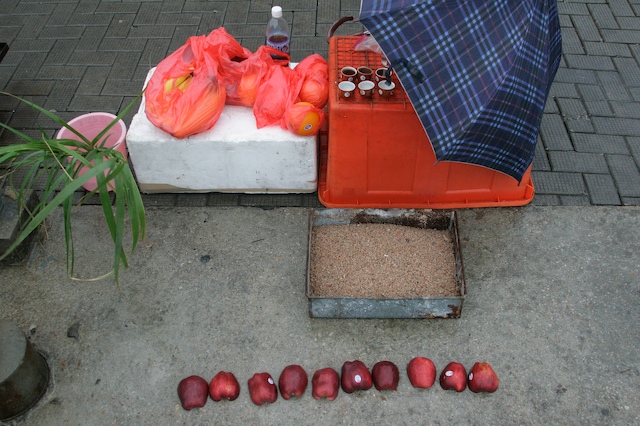 3. Preparation of the boat:

In case of Name Giving, paint the futures name on both sides of the hull somewhere close to the drum. When the paint is dry, cover it with the red wrapping paper or cloth.  Further, before the ceremony of course you need to put on the dragonhead and tail and perhaps decorate it a little. Just make it nice.  For decorations you can take a look in Dragon Boat Net’s Photo Galleries, in the album “Head and Tail, Part 1”.

It doesn’t matter much whether you keep the boat on land or let it to water before the ceremony begins.  Simply make sure when having it on a trailer that the pole is not disturbing the eye dotting and the dragonhead can be reached easy.  With the boat being in the water tie it up in an 90 degree angle with the dragon looking towards land, - otherwise you will have to take a swim to dot the eyes. 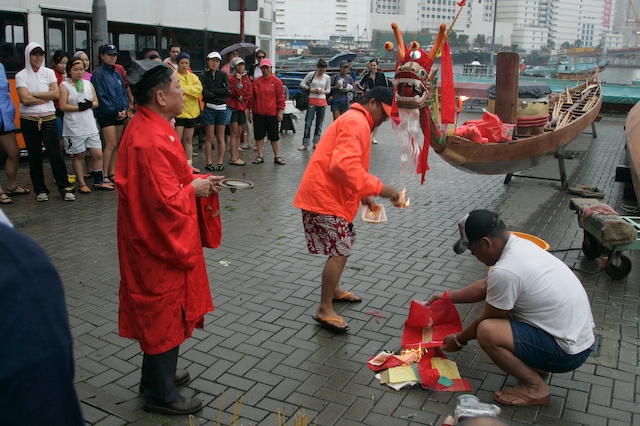 A) Making a Sacrifice to the Dragon:
Place the table cloth in front of the Dragon either on the floor or if you have on a small table. Put the fruits and chicken and perhaps others on it and decorate it nicely together with some incenses. Place the metal bucket or container nearby.

Some important person like team captain , chairman of your club or major should, while holding some incenses, bow three times to the Dragon and three times to the open water. The team and other attending guests may join him or follow to bow.

After bowing, burn the Hell Money.  So far no speeches are held!
By making the sacrifice and the bowing respect is shown to the Dragon and to the spirits of the water.

B) Giving Name to the boat: (only if applicable, otherwise skip this point)
As above an important person or, if this is the case, your sponsor removes the wrapping paper or cloth covering the name of the boat. He may say some nice but short words like: This boat shall from now on carry the name ???, I wish you all time good waters… or something like that.  Don’t let the Dragon wait to long, he still can’t see.

C) Awakening the Dragon by giving him eyesight, taste and power:
Again, one of the important persons, it doesn’t need to be always the same, takes the red paint and the brush and dots the dragonhead at five points:

D) Bowing of the alive Dragon:
If the boat is still on land, put it to water now.  The entire paddle crew with drummer and helm enters the boat and back paddles some distance away from the shore just to sprint back towards land again. This is done three times and symbolizes the Dragon bowing to the audience, which may bow also or greet him. 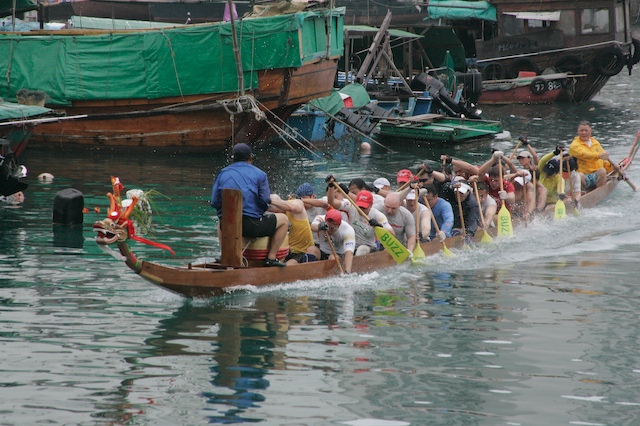 E) Showing the Dragon around:
The boat is paddled one time around the water venue. By this the Dragon and the spirits of the water become introduced and know where the Dragon will be moving around. 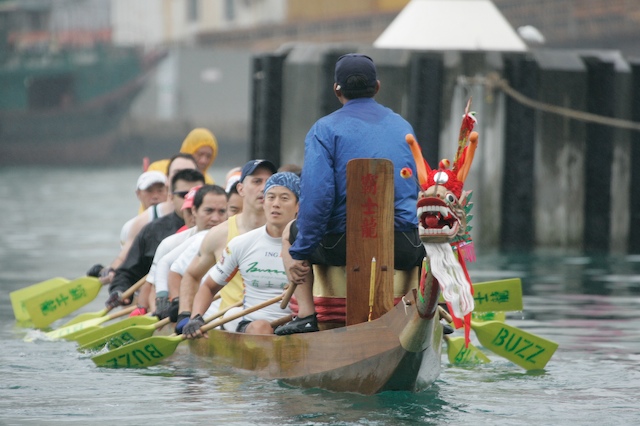 F) Cutting the Roasted Pig:
When the boat is back, it is time for speeches and to cut the roasted pig, which is known as food for the gods. After the cutting, eat it and have a nice party.  Also the fruits and chicken, which have been symbolically sacrificed are in fact still there and can be eaten.

Finally, again please be aware there might be different versions of the ceremony.  With the above described one you will be pretty much on the right track, following the Hong Kong Fishermen.

With the hope of having helped some of you,