It’s been an everlasting and roomer loaded discussion about seeing the Dragon Boat Sport in the Olympics. In past years many paddlers were hoping for dragon boats being included in the 2008 Beijing Olympic Games. After it has become clear to everybody that this is not happening and in fact never has been possible to happen, the hopes shifted to a showcase race for the opening ceremonies. That’s also been a big No! - It drowned in sport-politics.

Let’s stay realistic and take a look why Olympic recognition is so important for a sport and on the progress Dragon Boating is making:

Dragon Boat Racing has got it’s world governing body, the International Dragon Boat Federation or in short, the IDBF, which has developed Dragon Boating worldwide as far as we see it by today.

Due to the IDBF’s work and support Dragon Boats are raced now in 62 countries, which all have a National Dragon Boat Federation or Association being a member of the IDBF.

Developing a sport means beside others, it costs money and this needs to be raised in the one way or another. Many countries’ governments support the development of a sport. However, since there are a lot niche sports around and of course everybody wants government money, most of the countries have set criteria, which need to be matched for enabling them to judge about sport being worthy to support. Governments by themselves usually don’t know how to judge about a sport and therefore refer back to organizations like the General Association of International Sport Federations (GAISF) and the International Olympic Committee (IOC).

In April 2007 the IDBF, with on that time 58 National Federations under its roof, became a member of GAISF. Now it is one year later and four more countries have become IDBF members.

Well that’s a pace of four countries per year with now still 13 to go, which gets us to hopefully expecting the IDBF application to the IOC in a little more than three years. We will see and there is no doubt, it will be a lot of work to do for achieving this. Most important is to see the IDBF being on track.

Very good and encouraging is to see the IDBF actually being strongly supported by the Olympic movement in Asia. Recent examples were seen with the Olympic torch being carried on a Dragon Boat first in Hong Kong and then one day later in Macau. In both cities the National Dragon Boat Federations of the IDBF made this possible because of their good work and close relations to Olympic organizers.

The pictures of the Torch Relay involving a Dragon Boat even made it into the international press like the Financial Times. To our Dragon Boat friends in Hong Kong and Macau we give from here a big “Thank You” for your efforts and the only we can say is a respectful “Well done!!!”

Also worth to mention in this regard is the participation of Dragon Boats in the Asian Beach Games in Bali, Indonesia, in 2008 as well as Dragon Boats being now part of the 2010 Asian Games in Guangzhou in South China.

Another good thing undertaken by the IDBF is the “Paddles for Life” campaign, which involves high ranking politicians from around the world signing Dragon Boat Paddles as a way of educating children about saving the environment and using Dragon Boating for teaching the importance of team work and good healthy exercise. 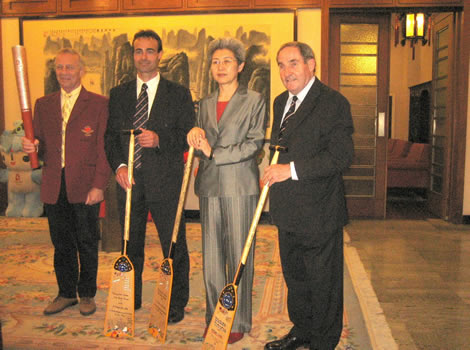 The photos show Mike Haslam, the Executive President of the IDBF, with the Olympic Torch used for the London Torch relay and the Chinese Ambassador in London signing the paddles. (photos provided by Mike Haslam) 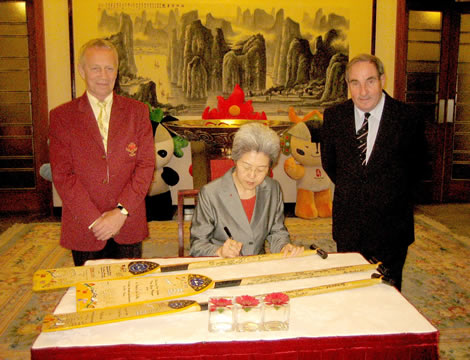 Coming to a conclusion and repeating myself, it is great to see the progress the IDBF is making to further develop the Dragon Boat Sport and for sure there will be more to report about the Dragon Boat on its way to Olympic recognition.